Since 1999 Superstition Springs Endodontics has been raising the bar in endodontic treatment. Our experienced and top rated team are industry leaders dedicated to providing state-of-the-art treatment and excellent care given with compassion. 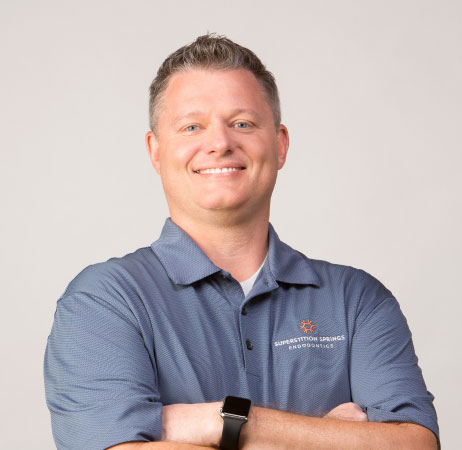 Dr. Jason J Hales has called Arizona his home since 2002. Having lived in various places such as Ohio, Puerto Rico, New York, Indiana, Utah, California & West Virginia, there is no other place he would rather be than sunny Arizona! His wife, Shondelle, was raised in Mesa, and his 5 children know only to call the desert their home.

Dr. Hales is skilled in all aspects of endodontics and endodontic microsurgery. He has been a leader in the use of 3D imaging in our dental community. He has extensive experience in the area of pulpal regenerative therapy and is known for his ability to save teeth that others have given up on. Dr. Hales is also the founder and author of The Endo Blog. His blog is recognized as a leading dental blog and routinely used as a resource dental education, being re-published throughout the world in different languages.

Dr. Hales believes that a root canal can make you smile. With the right clinical skills, right team, right technology and a genuine and caring connection with patients, a root canal no longer has to be a dreaded dental procedure but can be an experience that makes you leave smiling.

Dr. Hales enjoys family time, college football and traveling. He is an amateur photographer and usually has some of his latest photos around the operatory. He loves music and has been known to hum or sing along while working on his patients. 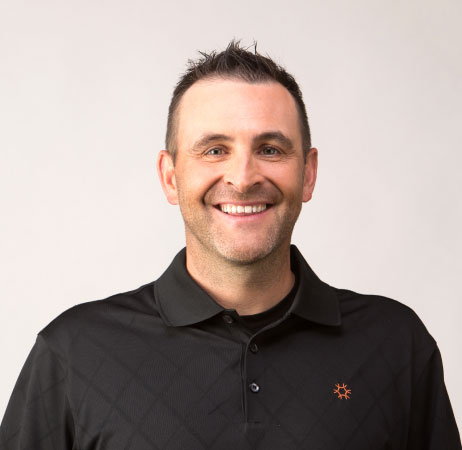 Dr. Jason Barney has been practicing endodontics at Superstition Springs Endodontics since 2011, after completing his endodontic residency at Indiana University School of Dentistry. He has been married to his wonderful wife since 1997 and are enjoying raising their four amazing children. Dr. Barney is fluent in Spanish, having served a church mission in Santiago, Chile. In his spare time Dr. Barney spends a lot of time being a spectator at his kid’s sporting events and cheering them on in their different activities. He enjoys trail running on the beautiful trails of the valley with his Rhodesian Ridgeback or, when not running, getting lost in a good book.

Dr. Barney completed undergraduate work at Brigham Young University in 2000 then attended dental school at the Ohio State University. Upon graduation in 2005, he practiced general dentistry in Grand Junction, Colorado before pursuing his endodontic residency, where he received an endodontic certificate and master’s degree. Dr. Barney has done research on the effects of irrigating solutions during root canal treatment and their effects on endodontic outcomes. He has had extensive training and experience in non-surgical and surgical microscopic endodontics, as well as vital pulp therapy and the use of CBCT scanning in endodontics.

Dr. Barney’s goals at Superstition Springs Endodontics are to provide patient care that leaves his patients with a positive perception of root canal therapy, to be an important part of their overall oral health care, and continue to grow as an endodontist with the many changes in store for endodontics.

Matthew B. Tonioli DDS Diplomate American Board of Endodontics 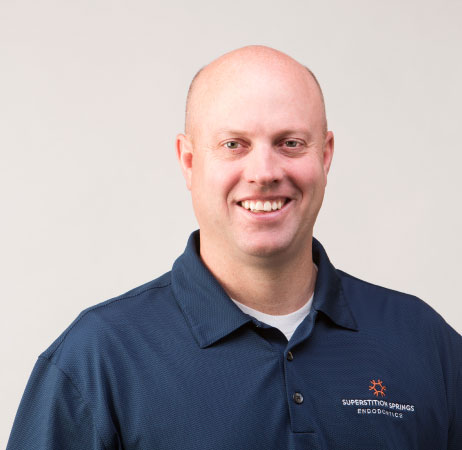 Dr. Matthew Tonioli was born and raised in Tooele, Utah. He served a mission in Paris, France where he learned the French language and went on to major in French at Brigham Young University. Dr. Tonioli met his incredible wife Patty in France and they have 4 fantastic children: Elise, Adeline, Abe, and Afton. Dr. Tonioli loves camping and spending time with his family, fishing, hunting and any outdoor activity. He and his wife enjoy traveling and have been able to visit many places throughout the world but after seeing the world they love to call Arizona their home.

Dr. Tonioli received a bachelors degree from Brigham Young University. He graduated from the University of Iowa with a DDS in 2002. He was accepted directly into the Endodontic program at the University of Texas at San Antonio, where he completed his studies. He practiced as a general dentist during his residency program in several different practices in the San Antonio area. During his time as a student, Dr. Tonioli was able to present research nationally at several different conferences including the Academy of Cosmetic Dentistry, the American Association of Endodontics and the American Association of Dental Research. He has also published several articles. He continues to be active in Endodontic Academics and serves on the scientific advisory committee for the American Association of Endodontics and is a reviewer for the Journal of Endodontics. Dr. Tonioli is a board certified Endodontist, receiving his certification several years ago.

Dr. Tonioli is an expert in the use of the operating microscope both for traditional endodontic procedures and in endodontic surgery. He has integrated cone beam computed tomography into his practice allowing the use of three dimensional imaging to enhance the success of his endodontic procedures. He has also expanded his knowledge into the world of implants and has become a fellow of the international congress of dental implantologists. Before joining Superstition Springs Endodontics, Dr. Tonioli practiced endodontics for 11 years in the Phoenix area. His patients have recognized him for his gentle bedside manner and ability to make having a "root canal" seem easy. He is certified and licensed in oral conscious sedation and has helped many patients make it through procedures they would have otherwise been too anxious to complete. He has been recognized several times by his peers as one of the Top Endodontists in Phoenix Magazine. Dr. Tonioli strives to make endodontics a comfortable experience for every patient that comes through his door. 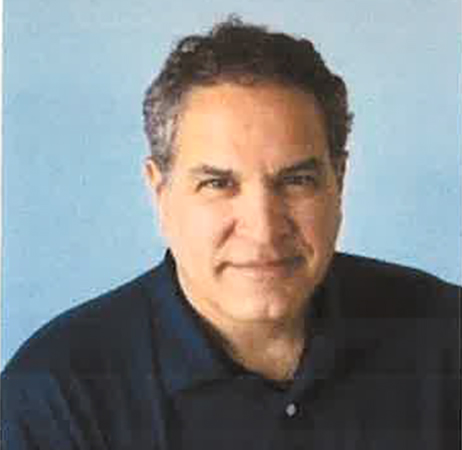 Dr. A. L. Christopher Kayafas has lived with his wife, Lisa, and their three children, Luke, Noah, and Zoe in Akron, Ohio since 1999. He and his wife, Lisa, have loved vacationing in Arizona for many of their past 28 years together. They have recently become empty nesters and have decided to follow the sunshine and now call the Grand Canyon State home.

Staying involved in the dental community has been particularly important to Dr. Kayafas. He has remained active in local, state, and national dental societies throughout his career. He is also a Diplomate of the American Board of Endodontics and is a Board-Certified Endodontist.

Dr. Kayafas' compassion and attention to detail allow him to care for his patients efficiently and effectively while making the root canal experience surprisingly pleasant. He is well-versed in the latest root canal treatment technologies available and implements them to provide his patients the best possible outcomes. He finds the process of helping his patients to relieve their dental pain to be an extremely rewarding experience.

When Dr. Kayafas is not in the office helping patients, he spends much of his free time with his wife, Lisa, in the great outdoors. He is an avid golfer, enjoys mountain biking, hiking, and the occasional home improvement project. 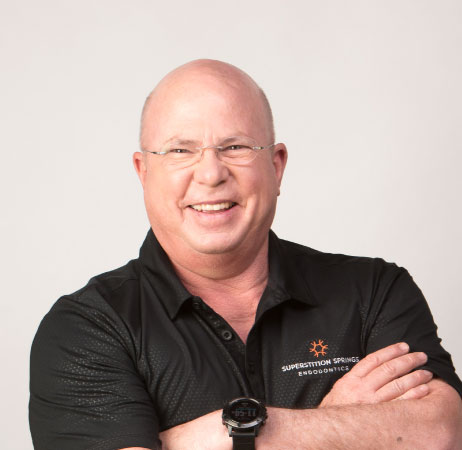 Dr. Edward H. Carlson was born and raised in Utah and he has been married to his wife Carrie since 1976. Together they have 3 daughters, 1 son, and 15 grandchildren.

Dr. Carlson graduated from Brigham Young University with a bachelor's degree in Zoology in 1980. He also was awarded minor degrees in Chemistry and English. He then graduated from West Virginia University with a DDS degree in 1983. Following graduation, Dr. Carlson worked for the Indian Health Service in Ft. Duchesne, Utah for 4 years as a general dentist before returning for advanced training in Endodontics at the Veteran's Administration Hospital in Long Beach, California. He completed his endodontic training in 1989 and moved with his family to Mesa, Arizona. In November 1994, Dr. Carlson completed the 5 year process of becoming board certified in Endodontics and is recognized as a Diplomat by the American Board of Endodontics.

As well as being the author of several published articles, both as a general dentist and an endodontist, Dr. Carlson maintains membership in the American Dental Association, American Association of Endodontics, College of Diplomats of the American Board of Endodontics, and the Arizona State Dental Association. he is a founding member of EndoQuest, an endodontic study group and also a founding member and Fellow of the American College of Endodontics and a Fellow of the International College of Dentists. In his "free" time, Dr. Carlson enjoys hiking, cycling, Dutch oven cooking, fishing, photography, and watching the Diamondbacks. Dr. Carlson enjoys working with the Boy Scouts and was awarded the Boy Scout Silver Beaver award.

Dr. Carlson has consistently been recognized as one of the Top Dentists (endodontists) in Phoenix as determined by his peers. Dr. Carlson has received this yearly recognition for over ...

Annette was awarded "Front Office Personnel" of the year by the Arizona Dental Association in 2004, an award in our opinion she could win every year. Annette is our business and office manager and we feel like the luckiest people in the world to not only know her but also to work with her every day!

Tara was awarded "Dental Assistant of the year" by the Arizona Dental Association in 2004, an award that was much deserved! Tara has been with us as our Back Office Manager and head Dental Assistant since 1996. She is proficient at her job, has excellent patient care, is energetic, happy, and one of the key people in our practice. 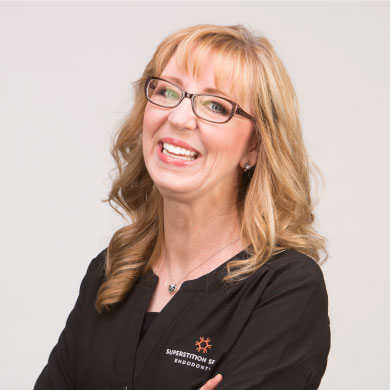 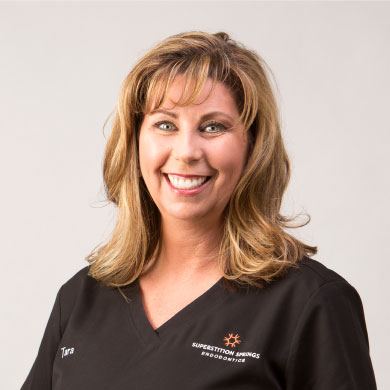